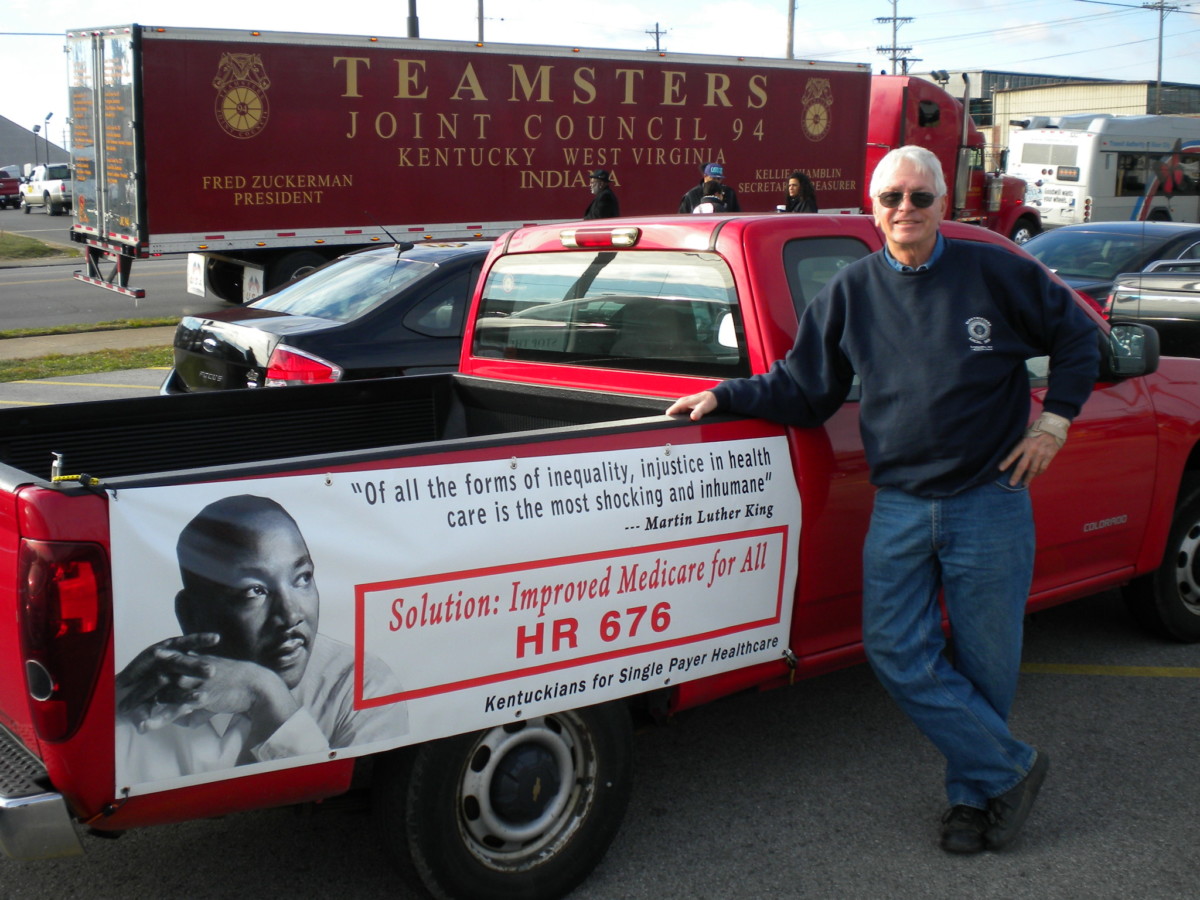 “Of all the forms of inequality,

is the most shocking and

Yet 48 years after Dr. King spoke those words, our country still suffers over 83,000 excess deaths each year among African Americans–deaths that would not happen if there were equality.

Our country’s health system leaves tens of millions of all colors without health insurance or with insurance so skimpy they cannot afford to use it.

Now, under the guise of solving the deficit problem, there is a relentless attack on Medicare, Social Security and Medicaid, the programs our nation won through the struggles of the 30s and of the civil rights era.

The Solution:  Expanded and Improved Medicare for All, HR 676

The good news is that there is a solution. Congressman John Conyers, Jr. (D MI), the sponsor of the bill that made Dr. King’s Birthday a national holiday, has introduced into the Congress HR 676, The Expanded and Improved Medicare for All Act.

This single payer legislation would divert hundreds of billions of dollars annually from profits and waste generated by the private health insurance industry into good care for everyone. Care would be expanded to all and costs brought under control.

Co-pays and deductibles would be banned ending today’s growing problem that health insurance policies are so miserly that even the insured forgo care because they can’t afford it. All of us would be respected as “covered” patients, ending the flight of hospitals and physicians from our neighborhoods to wealthy areas.

Medicare is not the problem. It operates with less than two percent overhead. The healthcare crisis actually stems from the bloated costs of the private world of insurance companies. Under HR 676, those for-profit companies would be removed, allowing us to improve care and include everyone.

In 2011, Bill Clinton said that we could save $1 trillion a year if we adopted the health care system of any of the other developed countries in the world. All of those countries have universal health care under a single payer type of publicly funded program. No more stewing over the deficit!

The passage of HR 676 would save Medicare, end the uncontrolled, gargantuan rise in health care costs, ease the deficit pressure, and actually bring universal health care to the nation.

So why are we even debating cuts to Medicare, Social Security, and Medicaid when the solution is at hand that would bring us both better care and cost controls? HR 676, an improved Medicare for All, is sitting in the Congress, awaiting the rising of a movement that will insist upon its passage.

As Dr. King said, “The time is always right to do what is right.”

A free program for your church or other organization on single payer is available from Kentuckians for Single Payer Health Care (502) 636-1551, nursenpo@aol.com.

Dr. Kevin Kavanagh, a leading Kentucky advocate for transparency in health-care costs and  outcomes, writes in a recent commentary that Medicare-for-all might be the solution to our financing woes.

I support going to a single-not-for-profit payer system and eliminating for-profit health insurance companies. These unneeded middlemen must be eliminated if health care costs are to be controlled.

Twenty percent to 30 percent of the premium dollar goes for their profits and overhead.

I am thankful for Gov. Steve Beshear’s Medicaid expansion, but his reliance on private (for the most part) companies to “manage” (read: “deny”) health care is robbing hospitals and other providers of rightful compensation and merely increasing the private companies’ profits.

Anthem, an Indiana-based insurer, recently announced record profits, which leave our rural facilities teetering on the brink of insolvency.

One only has to look at Auditor Adam Edelen’s recent in-depth report for verification of their poor financial health. Our people deserve better. It can be done. Medicare for all. Easy.

Letter in the Herald Leader.

On Saturday, May 30, 2015, KSPH activists distributed 600 flyers on single payer as they participated in the Louisville MS Walk.  The tiny, hot pink leaflet stated:

While health care reform helped some, many still find essential drugs too costly or not on the formulary. 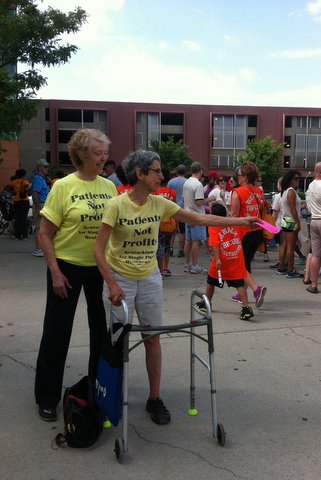 The way forward.    A bill in Congress, HR 676, Expanded & Improved Medicare for All, will provide care for everyone under a single payer, publicly funded system.  All medically necessary care including dental & drugs will be covered–and you choose your doctor.

No co-pays, no deductibles, no limited networks.  No worry about medical bills!  Monies now going to corporate profits will be available for care.

At right, Kay Tillow and Jim Harmer at the MS Walk.

KSPH is planning an event to celebrate Medicare’s 50th Birthday on Thursday. July 30, 2015.

Come to the KSPH meetings and be a part of making it happen!  The next meetings are Thursdays, June 4th and June 18th, 5:30 pm, Board Rm on the Mezzanine, Louisville Free Public Library, 301 York St. 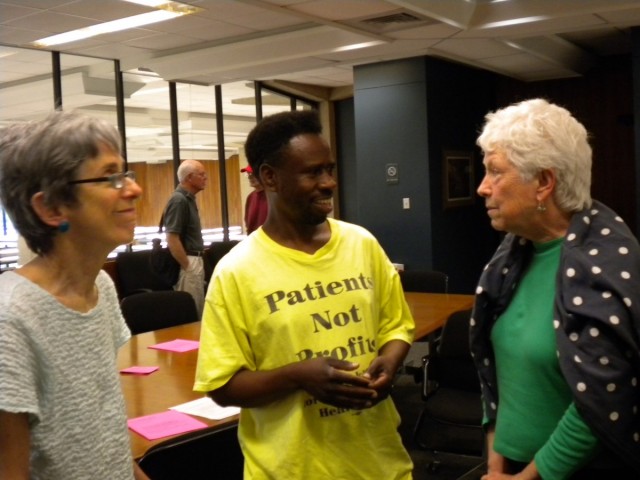 At a single payer meeting are (L to R) Jill Harmer, Antonio Wilson, and Harriette Seiler.

Single Payer Health Care Back on the National Agenda

On February 3, 2015, Congressman John Conyers, Jr. of Michigan, pictured below, introduced HR 676, Expanded and Improved Medicare for All, into the 114th Congress. He was joined by 44 initial cosponsors including Rep. John Yarmuth of Kentucky. Since then four additional representatives have signed on, Chaka Fattah of Pennsylvania, Zoe Lofgren of California, Joyce Beatty of Ohio, and Ted Lieu of California bringing the number up to 48.

You can see all the cosponsors of HR 676 here. 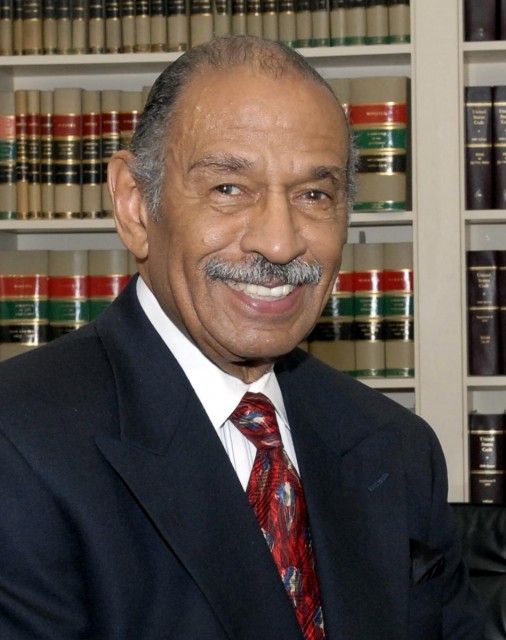 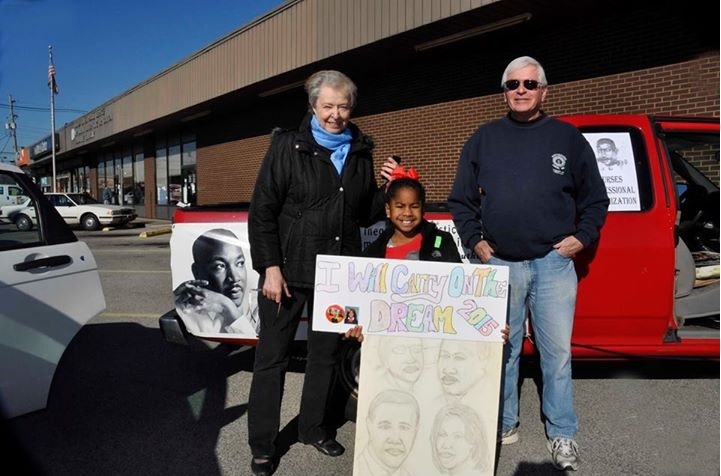 On January 19, 2015, Kentuckians for Single Payer Health Care participated in the caravan celebrating the life and work of the Rev. Dr. Martin Luther King, Jr. Photo by Ron Hargrove.

Also on the King Holiday, members of KSPH took part in a celebration at Shawnee Presbyterian Church, 101 South 44th Street, Louisville, KY. The Rev. Ron Robinson, Shawnee’s pastor, serves on the steering committee of KSPH. Sponsored jointly by the church and the group Sowers of Justice, the service and workshops commemorated Dr. King’s call for non-violence, equality, and economic equity.

Garrett Adams, MD, led a health care workshop, stressing the need for a single payer system that would cover all medically necessary care for everyone in our country. There is a bill in Congress, HR 676, the Expanded and Improved Medicare for All Act, that would provide such coverage–cutting costs, reducing disparities and saving lives.

Workshop attendees shared insights and personal health care stories, agreeing that the current system remains inadequate. They indicated a wish to know more about single payer and suggested we continue our efforts to educate the public. In 1966, Dr. King referred to injustice in health care as “shocking and inhuman.” In 2015, he would undoubtedly remind us that there is still much work to be done. 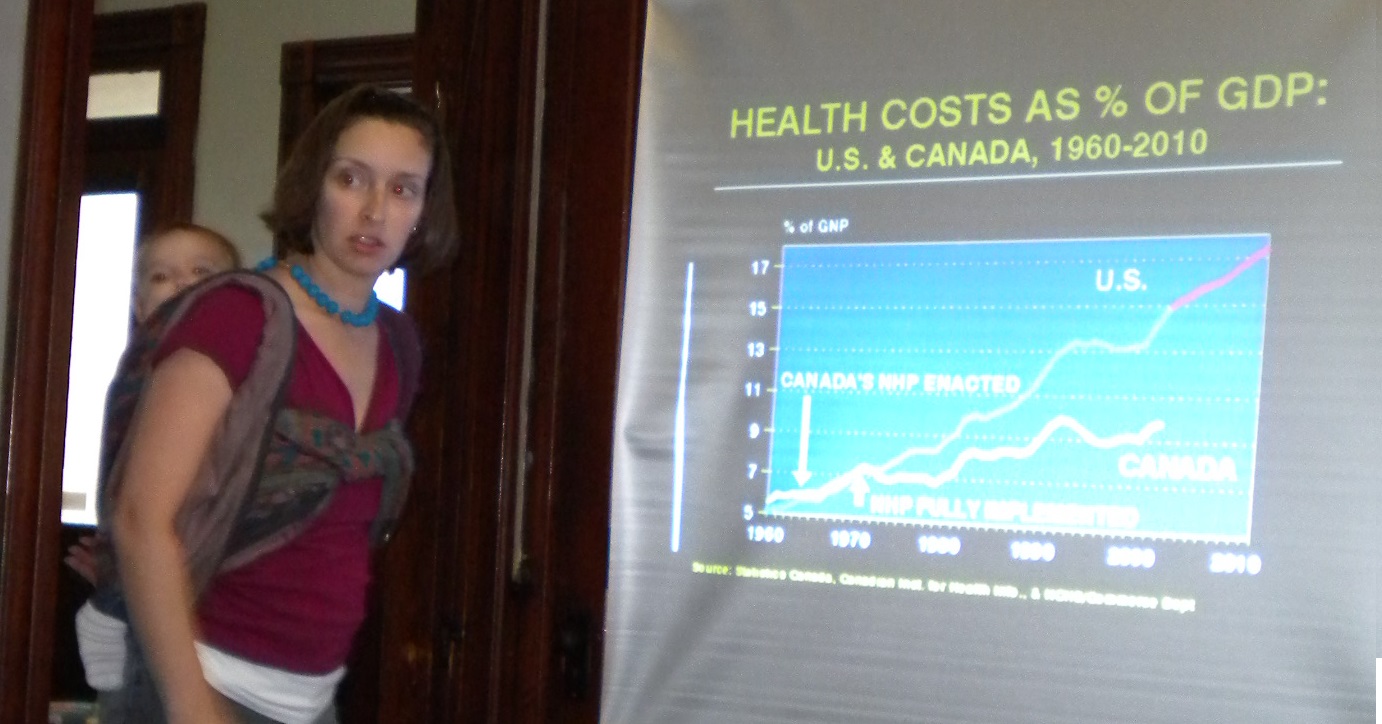 The Louisville Student protest was one of 70 across the nation. 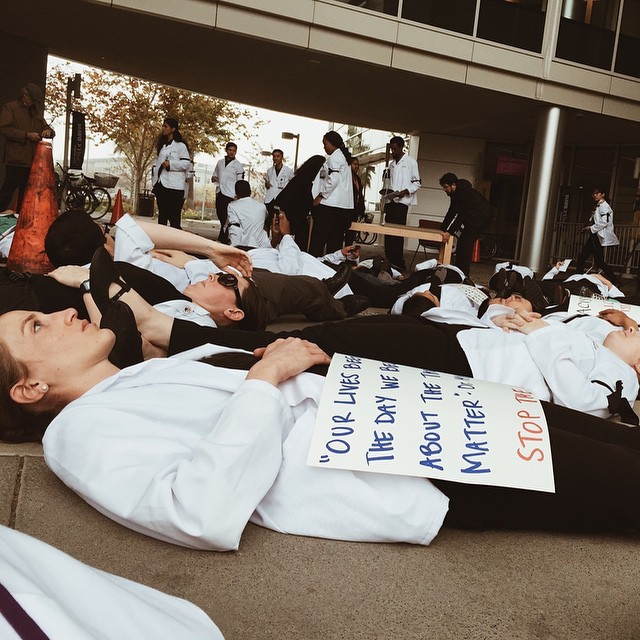 The nationwide protest was initiated by medical students in Philadelphia and San Francisco, and Physicians for a National Health Program assisted them with the publicity.

The story was covered by the Guardian, Huffington Post, and Rachel Maddow.

The action was endorsed by Students for a National Health Program, the student affiliate of PNHP.

Christy Duan wrote about why she participated in the protest.

Here’s one panorama of the actions on more than 70 medical school campuses. 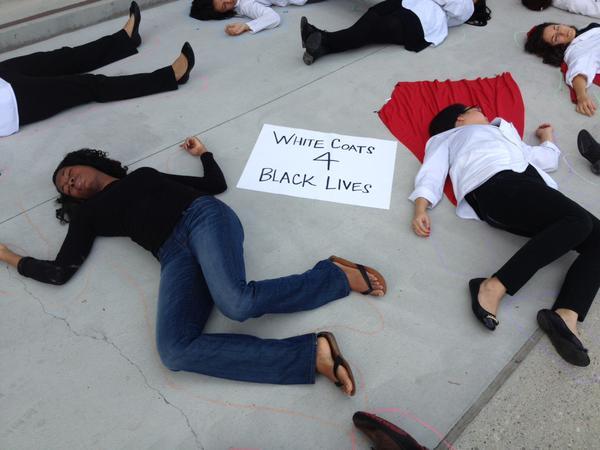 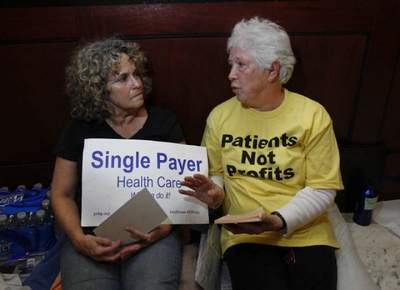 Harriette Seiler, at right, with Nan Goheen at the 2009 sit in at Humana as part of nationwide actions seeking to place single payer into the health care debate. Harriette’s current letter printed in the Courier-Journal is below.

Most Kentuckians are pleased that health care coverage has been expanded in our state, but there are questions to be considered.

Persons who bought private plans (gold, silver, etc.) on the Kynect exchange last year must now re-enroll for 2015. Before buying, enrollees should read the policy carefully: Can you see your preferred doctor? How narrow is the hospital network? How high is the deductible? If you had to pay out of your own pocket for treatment, would that keep you from going for help when you have worrisome symptoms? If you have a chronic disease, check the drug formularies: Is your medication listed? Has the co-pay gone up?

As we ponder all these critical issues, the people in other advanced nations are happily going about their day because their leaders had sense enough to implement a single-payer system —saving money for their country and for each individual. Instead of all the political and judicial machinations now going on across the U.S., let’s just tell Congress to pass HR 676. Simply improve traditional Medicare and give it to everybody!

The line snaked through the pre-dawn darkness of a church parking lot. Hundreds, many wrapped in blankets against the chill, awaited the opportunity to see a dentist or doctor or to get a pair of glasses, all without any cost or questions. Their presence, in spite of Kentucky’s successful sign up of more than 500,000 in the exchanges, bore witness to the continuing unmet health care needs and the necessity to move the nation forward to single payer.

This was the October 25-26, 2014, Free Clinic, one of many that Remote Area Medical regularly sponsors in Appalachia and across the country.

“Wow, it looks like 3D,” exclaimed a young woman who peered through her new glasses for the first time. Check out RAM on The Daily Show.