What is the motivation to pay $100 for a sleepless night riding a bus from Louisville to Washington, DC; for walking the halls of Congress the next morning, for sitting or standing in the hot sun at a rally in the afternoon, for spending another sleepless night riding the bus back to Louisville, and going straight to work almost on arrival the same day? Ask 52 Single Payer health reform activists from Kentucky and southern Indiana, who did exactly that. Why would you do that?

We did it to demonstrate our commitment to the idea that all Americans deserve health care without financial barriers. We did it to knock a hole in the wall that health, no, wealth insurance companies and the for-profit health industry have built between the people and our elected officials. We did it so that those congress people could hear directly from us what we, the people, want. 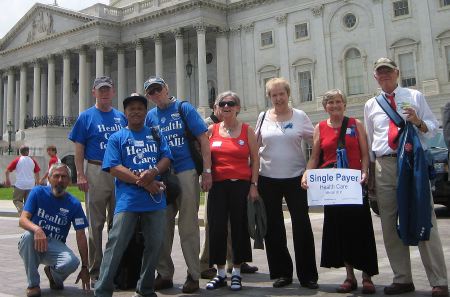 The southern Indiana branch of Hoosiers for a Common Sense Health Plan and Kentuckians for Single Payer Healthcare organized the trip.

We were a diverse group. The age range was from 14 to 85 years, and one rider drove from Kansas City, MO to join us. The large Hoosier contingent included one from as far as Indianapolis. Kentuckians were from Paducah, Louisville, Lexington and central Kentucky. 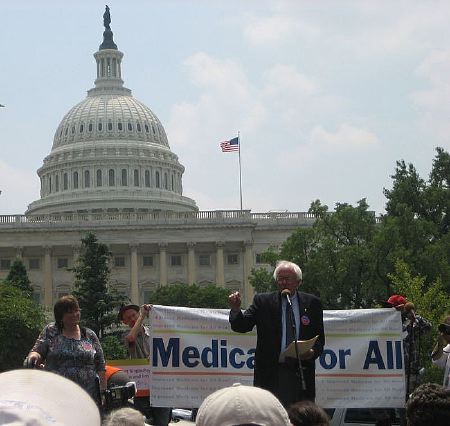 Afterward we took petitions for enactment of HR 676 to Sen. Mitch McConnell’s office. Some twenty or more of us crowded into Sen. McConnell’s outer office holding the petitions taped to string. If fully stretched out, the petitions would reach two football fields – 7,000 Kentucky signatures for single payer national health care.

Our presence in Washington made an impression on the congressmen. As a result of nationwide demonstrations and activism they are beginning to get the message. It was announced just yesterday that Single payer legislation now will be brought to the floor of the House for debate and a floor vote, a remarkable achievement, that would never have occurred without street activism. Our work is paying off. Who knows, we may have to go back again and again. This is a movement. We have to keep up the pressure, and we will.