On Friday, October 30, 2015, 400 physicians, medical students, nurses, and single payer activists rallied in downtown Chicago calling for an end to private insurance and the passage of Improved Medicare for All, HR 676.  The demonstration focused on the Blue Cross/Blue Shield offices at 300 E. Randolph.

Medical students and physicians who were attending a Physicians for a National Health Program leadership training met at Chicago’s “bean” prior to marching to the rally. 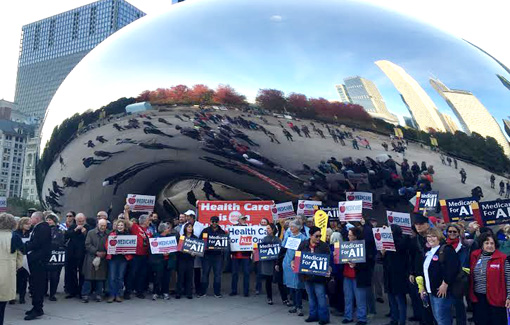 Tom Conway, International Vice President of the United Steelworkers addressed the rally telling of steel and other companies that are shifting health care costs to workers and refusing to cover retirees at all.  Thousands of workers are currently locked out of their jobs, as corporations try to force concessions on health care and other issues.

This video features scenes from the rally and includes part of the speeches of Dr. Robert Zarr, President of Physicians for a National Health Program, and Tom Conway.
https://www.youtube.com/watch?v=xyCWK2uXPEs
Kentucky physicians Syed Quadri and Peter Esch attended the PNHP meeting.  More on the PNHP annual meeting can be found here:  www.pnhp.org