by Jessica Geddes, University of Kentucky College of Medicine student

On Monday, February 25, 2019, medical students Jessica Geddes and Patrick Osterhaus, members of the Programming Committee of the American Medical Association Chapter at the University of Kentucky College of Medicine, held a panel discussion about Single Payer Healthcare for medical students. The guests included Kentucky State Senator Reggie Thomas, J.D.,  Dr. Ewell Scott, M.D., and Dr. Glen Mays, Ph.D. in Health Policy and Administration. Senator Thomas is a member of the Democratic Party, and earned a law degree from Harvard Law School in 1978. Dr. Scott earned his medical degree from Case Western Reserve University Medical School in 1966, and recently retired after practicing Internal Medicine in Morehead for over 40 years. 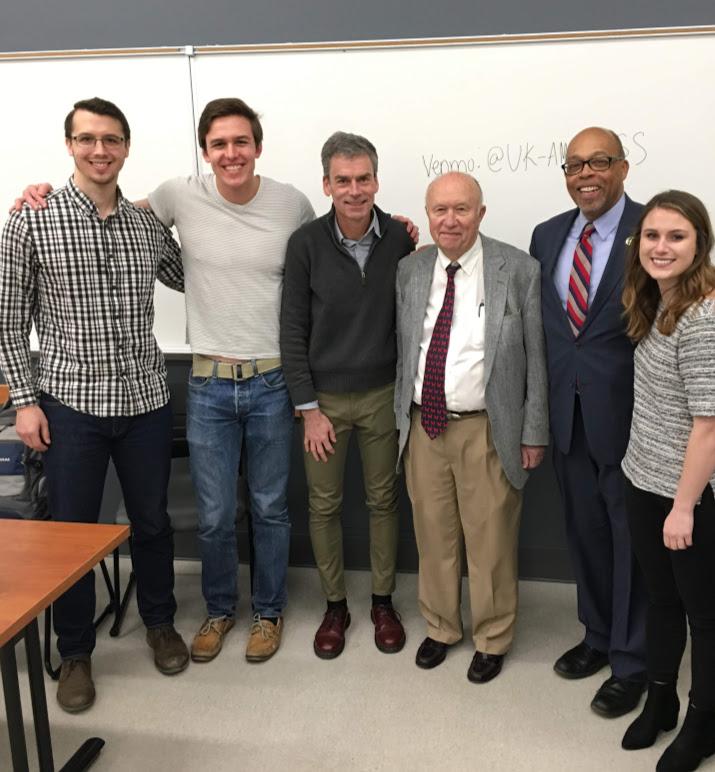 Dr. Mays is the Scutchfield Endowed Professor of Health Services and Systems Research at UK; he earned is undergraduate degree in Political Science from Brown University, and completed both an MPH and PhD in Health Policy and Administration at the University of North Carolina-Chapel Hill before completing a postdoctoral Fellowship in Health Economics at Harvard Medical School.

All panel members agreed that a Single Payer system would effectively lower hospitals’ overhead costs without changing physician salaries very much, but had different ideas of how best to implement such a system. Dr. Scott was in favor of a fast implementation of a Single Payer System, pointing to Taiwan as an example, where a complete healthcare overhaul was achieved in 1995. He said, “our country needs to get over our fear of socialism,” in order to improve healthcare for citizens.

On the other hand, Senator Reggie Thomas advocated for a more gradual approach, suggesting that a good first step would be lowering the age of Medicare eligibility to 55 (from 65), then 45 and so on. He expressed concern over transitioning to single payer too quickly, saying “I don’t want to set something up to fail.” Senator Thomas gave the example of the Affordable Care Act, which was less revolutionary yet faced major opposition and barely passed in 2010 even after several compromises. He also explained one major obstacle to implementing a Single Payer system — lobbying from private insurance companies.

Dr. Mays weighed in on the financial aspects of both methods — he described the shock that would occur due to federal budget increases if Single Payer were to be implemented quickly, and the difficulty that would arise with setting prices for medical services under a Single Payer model. He explained that we would have to trust the federal government to decide payments, but in doing so we risk setting prices too low and causing hospitals to go out of business. He brought up the idea of having private insurance companies coexist with a Medicare for all system, similar to Medicare Advantage Plans today, but other panelists pushed back against this approach. He said we should keep an eye on states such as Maryland, which has been experimenting with an all-payer global budget program, and California, whose state government has been considering implementing a similar program.