On Tuesday September 13, 2011, Dr. Garrett Adams, current President of PNHP and founder of the Kentucky chapter of PNHP testified before the Senate. The occasion was a hearing entitled “Is Poverty a Death Sentence?” The hearing was sponsored by Senator Bernie Sanders (I-VT) for the United States Senate Committee on Health, Education, Labor, and Pensions Subcommittee on Primary Health and Aging.

Dr. Adams was asked to testify at this hearing because of his association with a free clinic in Beersheba Springs, Tennessee. (The clinic’s website can be found at beershebaclinic.org.)

Dr. Adams’s testimony relates the realities of life and death for twelve patients from Kentucky and Tennessee that he has known, or of whom he has had first-hand knowledge. All of them have suffered or are suffering as a result of a lack of access to appropriate medical care. The testimony is unsettling, but enlightening.

Thank you to Senator Sanders for giving a voice to these unfortunate Americans who live in a country where health care is not a right for every resident, and it should be.

By Linsen Li
The Courier-Journal

Brent Humes has not had health insurance for 15 years.

“At my past jobs, signing up for health insurance means cutting my paycheck in half,” said Humes, who is currently unemployed.

He was among about 150 people who gathered yesterday across from Humana’s downtown Louisville headquarters to protest private insurance companies.

The demonstration, organized by Kentuckians for Single Payer Healthcare and Physicians for a National Health Program, is part of a national effort to establish a universal health-care plan.

“Our purpose is to educate the public and politicians about how the single-payer plan is the best option,” said Dr. Ewell Scott, an internist in Morehead, Ky.

“A single, government-sponsored health-insurance company is more efficient and provides coverage for everyone,” Scott said. “It is by far and away the best solution to the country’s health-care problem.”

The differences between health-insurance companies and the protesters are smaller than they appear, said Jim Turner, a Humana spokesman.

“Our ultimate objective is to make health care affordable for everyone; in that sense Humana is in agreement with the protesters,” he said.

He added, however, that private health-insurance companies like Humana are here to stay.

“There will always be a need for public-private cooperation in the health-care system,” Turner said. “The government looks to the private sector for contributions such as innovation.”

While Humes said he has not been greatly affected so far by not having health insurance, he hopes to be insured once health care is more affordable.

“I suspect one day I will need it,” he said.

By Laura Ungar
The Courier-Journal

“All who are ready to fight for what they believe is right in health care, raise your hand,” he told more than 150 people at the Making Health Care Happen single-payer seminar at Indiana University Southeast in New Albany. “You’re not gonna get it without a contest. And I’m looking forward to a contest.”

His talk was one of several planned throughout the country. It was partially funded by the Presbyterian Church (U.S.A.) and sponsored by Hoosiers for a Commonsense Health Plan, Kentuckians for Single Payer Healthcare and Physicians for a National Health Program.

Conyers, a Democrat serving his 21st term in the House, introduced a bill nine years ago — and every year since — to expand Medicare so that everyone would be covered regardless of employment, income or health. He said the measure, called H.R. 676, has 77 co-sponsors and the endorsement of more than 4,000 physicians.
…
Link to Full Original Article

Members of Kentuckians for Single Payer Healthcare preparing a mailing to 3,200 members and supporters announcing the upcoming demonstration, “Patients Not Profits” and the Presbyterian-sponsored seminar for HR 676, “Making Health Care Happen.” 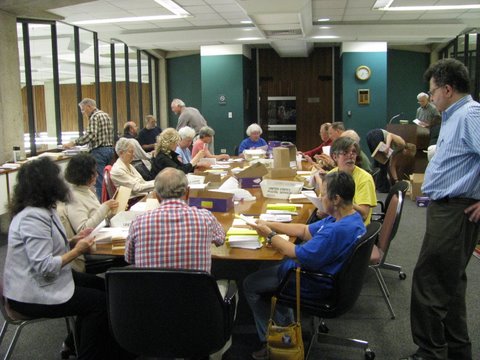 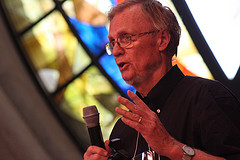 Hoosiers for a Common Sense Health Plan, including a contingent from southern Indiana, at Senator Birch Bayh’s office. HCHP demonstrated at Wellpoint insurance company’s stockholders meeting (largest health insurance company in the US); they then marched to Sen. Bayh’s office, protesting his supporting private health insurance. Bayh’s wife is Wellpoint board member, at a salary of $300,000 a year. 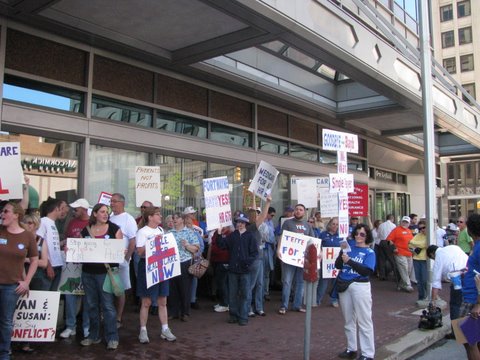 Hoosiers for a Common Sense Health Plan, including a contingent from southern Indiana, at Senator Birch Bayh’s office. HCHP demonstrated at Wellpoint insurance company’s stockholders meeting (largest health insurance company in the US); they then marched to Sen. Bayh’s office, protesting his supporting private health insurance. Bayh’s wife is Wellpoint board member, at a salary of $300,000 a year.

Louisville, May 2009. Members of Kentuckians for Single Payer Healthcare preparing a mailing to 3,200 members and supporters announcing the upcoming demonstration, “Patients Not Profits” and the Presbyterian-sponsored seminar for HR 676, “Making Health Care Happen.”

On Wednesday, April 29, 2009 a group of 30 interested citizens met at the Downtown Library in Lexington, Kentucky to hear Dr. Ewell Scott, a Morehead internist and recent recipient of a lifetime achievement award from the Kentucky Medical Association, lead a discussion of how market-based private health insurance has failed the United States. He said the United States National Health Care Act, HR 676, a bill in the US Congress, can address our current economic woes, as well as provide quality health care to 48,000,000 uninsured and an equal number of underinsured Americans. Dr. Scott explained to the audience details of the wastefulness and inhumanity of the current profit-based system. For example, in Morehead, Kentucky, Dr. Scott’s private practice must deal with 34 separate insurance plans. (There are 17,000 separate plans in Chicago.) He pointed out the huge administrative expense market-based private insurance costs our system, $400 billion annually. Indeed health insurance costs, premiums, etc. soon will consume up to 30% of the average wage.

As a member of his local hospital Board of Directors, Dr. Scott described how he has witnessed his hospital lose $500,000 a month in unreimbursed services, a fiscal drain that could be stopped by a government –financed national health plan. Everyone would get comprehensive health care and all of it would be reimbursed.

Dr. Scott was introduced by Janet Tucker, RN, who along with Jan Ewing, RN is leading the development of a Lexington area chapter of Kentuckians for Single Payer Healthcare. The group will meet again at the Lexington Library, Monday, May 4, at 7:00 PM, Room B. Anyone who wants to improve health care quality and access for all Kentuckians is urged to come to this meeting. For more information please write info@kyhealthcare.org.

The Single Payer Solution to Our Health Care Crisis

Presentation followed by Q and A, plus discussion of how we can win broad public and political support for single payer health care in Kentucky.

Dr. Scott, born and raised in Frankfort, KY, is a Charter Member of the Kentucky Chapter of Physicians for a National Health Program (PNHP-KY). He graduated Cum Laude from DePauw University and from Case Western Reserve University Medical School. Dr. Scott did his Internship in Med-Peds at the University of Virginia Hospital and his Internal Medicine Residency at the University of Virginia. He is Past President of St. Claire Regional Medical Center Medical Staff. He served as President and Medical Director of Morehead Clinic, and he is Clinical Volunteer Faculty at both the UK and U of L Schools of Medicine. Since 1972 and currently, he is in active practice in internal medicine in Morehead, Kentucky.

Dr. Scott is deeply involved in his community, in the Kentucky Medical Association, and in numerous medical, civic, and community organizations. He has lectured extensively on single payer health care.

Event sponsored by: Physicians for a National Health Program-KY and Kentuckians for Single Payer Healthcare www.kyhealthcare.org.

Learn all you can about health care alternatives

By David Ross Stevens
The Courier-Journal

By now it is almost a cliche to say that America’s health care system is broken. In response, many politicians who are calling for “reform” and “universal health coverage” are not, in fact, clarifying the situation because they include in their new plans the very elements that have busted the system. So the political battle in the first days of 2009 will be over “token reform” or a bold, truly universal type of health insurance.

The challenge is for citizens to get involved. the public must do its part by educating itself about the various alternatives, and letting their representatives in Washington know what they conclude.

How broken is our current system?

Some 47 million Americans are uninsured; another 50 million are underinsured (not fully covered).

About 8.7 million children are uninsured.

Most bankruptcies have a health reason as a major cause, and 68 percent of those people who have gone belly up do have health insurance policies.

The World Health Organization ranks the level of U.S. health care at 37th in the world.

Private health insurance companies, which have doubled the premiums since 2000, have a bureaucratic overhead of 28-31 percent while Medicare operates at 3 percent efficiency. Therein lies a large part of the problem. These companies have an incentive to reduce benefits to patients.

The most persistent solution on the grassroots level is a single-payer system, the single payer being the federal government. This program involves a Medicare-type approach for everyone, but it would be expanded to include dental care, vision care and preventive programs. Overall, it would cost about the same — maybe a little more, maybe a little less — as the present 15 percent of the Gross National Product (GNP). All other industrialized nations with full coverage for all citizens average about half the costs in total medical care.

A single-payer system is best outlined in congressional bill HR676, which would set up the National Health Insurance (NHI) program. What it is not is “socialized medicine.” England and Spain have socialized medicine, wherein the doctors and hospitals are all employees of the federal government. Under HR676 the present system would stay; doctors would remain private vendors and would submit their bills to one payer, the U.S. government, not to the 1,500 private health insurance companies. Patients would still choose their doctors. (More about HR676 later)…