Read the Physicians’ Proposal for a National Single Payer Program.  Sign on to it.

Quote of the day by Dr. Don McCanne.

Answers to questions on single payer.

HR 1976, national single payer bill, currently in the House, which needs to be improved to ban and convert the for-profit hospitals, nursing homes, dialysis centers, etc.

Please support the work of Kentuckians for Single Payer Health Care by making a donation on line here.  Or you can mail your check to KSPH, PO Box 17595, Louisville, KY 40217.  Annual dues are $5, but we welcome whatever you can give.

On July 24, 2021, many thousands of people in 56 cities participated in the March for Medicare for All, initiated by a new coalition that called for urgent action for health care as a human right and a basic freedom.

How can we have life, liberty and the pursuit of happiness when we live in constant fear of illness, bankruptcy, or homelessness because of the outrageous for-profit healthcare system,” said the coalition.  “One event can ruin your life, even if you have insurance.  The industry can always say ‘no.’ We need a big fat ‘yes’!

Kentuckians for Single Payer Health Care (KSPH) brought together a coalition of 23 organizations to cosponsor the Louisville event on the lawn of the Mazzoli Federal Building. 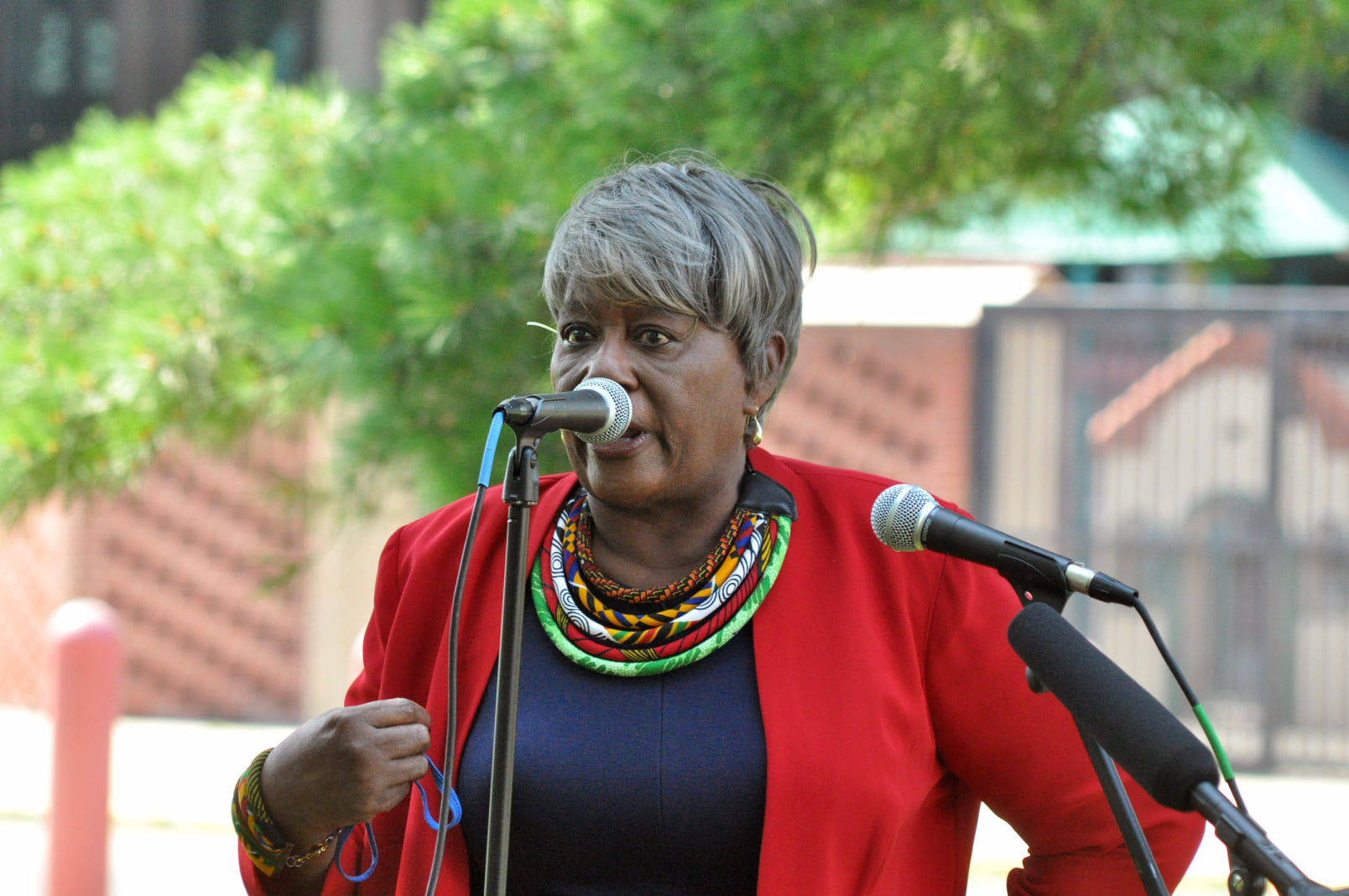 Ann Hagan Grigsby, (photo left) President and CEO of the Park DuValle Community Health Center opened with a call for single payer health care.  Her foster mother, she said, died before the age of 65 from lack of health care, “and it’s still happening today.”

“Until we as a people decide to tell members of Congress that the system is broken, that we will not take it anymore, it will not change.  We need to put people before profits,” she concluded.

Greg Tichenor, Board Member of the Kentucky Alliance Against Racist and Political Repression (KAARPR), said, “We as a society have accepted some people as disposable.  Money interests cannot be louder than the peoples’ interests.”  He called on the crowd to make their voices heard with their representatives and at the ballot box.

Marcellus Mayes, President of the Metro Disability Coalition spoke “as a blind American and a Kentuckian representing people with multiple sclerosis, muscular dystrophy, Parkinson’s disease, developmental disabilities, stroke patients, cerebral palsy and all who have pre-existing conditions.  Single payer health care is essential and necessary for people like me and those I associate with,” he said.  “We as Americans should all look to each other, nobody should be treated differently whether you are gay, straight, disabled or otherwise.”

“We claim to be a compassionate city, but so many people are being left behind” he said.  “You need to show us grace and mercy and provide us with single payer health care.”

“The community we serve, is composed of essential workers: restaurant, factory, cleaning services, construction, yard work.  All these workers have continued to work their job sites,” she said.  “The pandemic has brought for those affected an increase in medical bills, loss of income or the loss of jobs due to the economic crisis that resulted from it.  Most of them don’t have health insurance.”

“According to a recent report, the debt owed to collection agencies by Americans stemming from medical care is 140 billion dollars. What I have described represents an enormous problem, imagine if we make it worse by adding several layers of barriers such as language, culture, education, income and the history of confronting traumatic events.”

She spoke of the Center’s organization of seven successful vaccination clinics that distributed 1,169 vaccines.  “Health care is a human right,” she said,  “Let’s keep working together to achieve this common goal.” 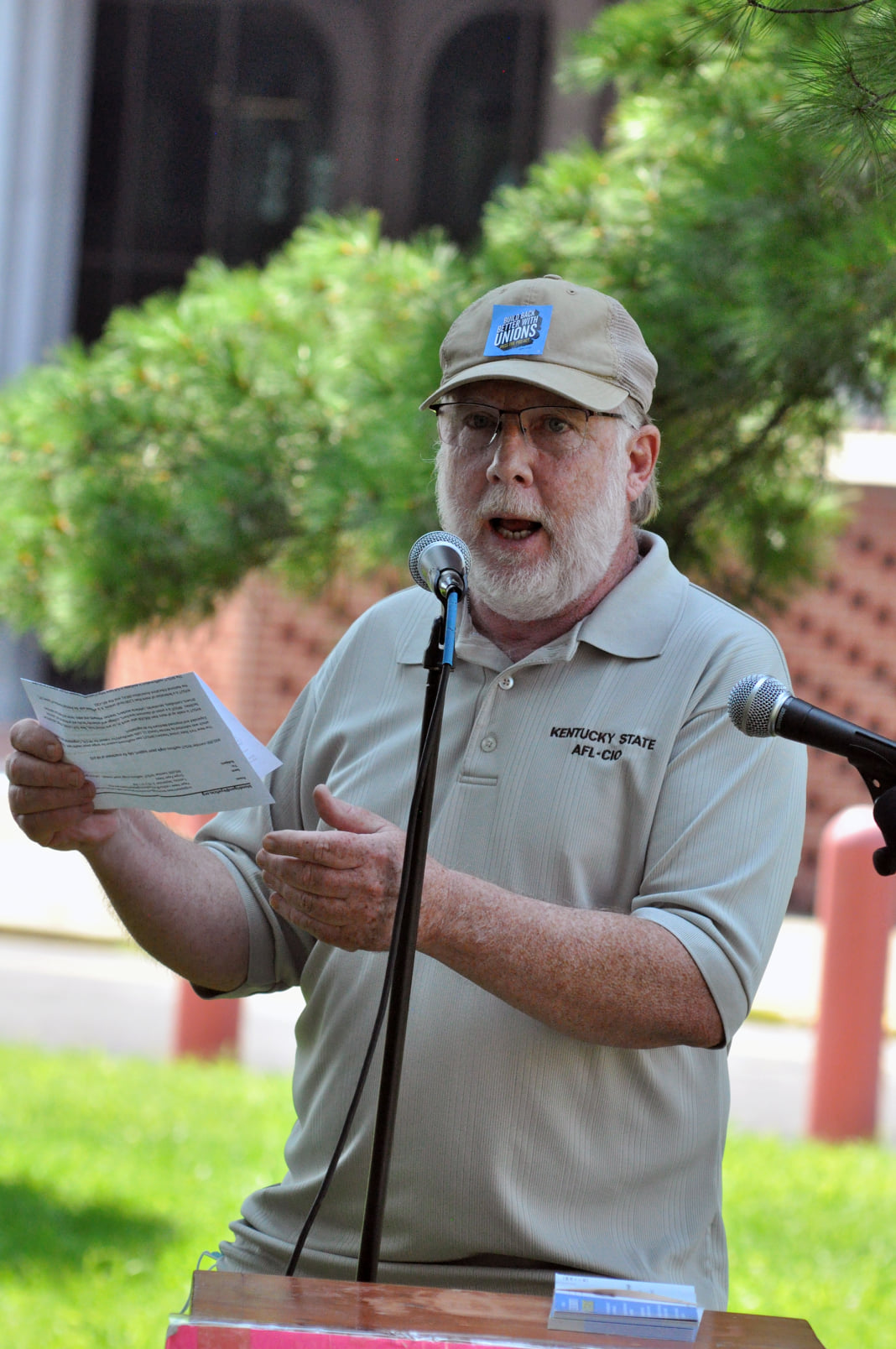 “I am really proud to say that the Kentucky State AFL-CIO was the first of the state federations to support single payer.”

He spoke of the difficulties in bargaining for wages, retirement, and other benefits because health care costs continue to skyrocket.  “What we want to do is take health care off the table.”

“We are absolutely tired of this corrupt system which is based on greed.  We need to take that profit motive out.  We need to stop paying CEOs tens of millions of dollars.  We need to stop these corporations from lowering benefits and denying people care.  This is wrong and that’s why our cause is so positive and so great.”

He pointed to other current issues such as the PRO act which would make it easier for workers who want to organize to have an opportunity to do so.

He urged everyone to support single payer, Medicare for All, and “get it through congress so we can transform this nation into one that stands with people instead of trying to deny them this basic right.”  He ended by saying “And we will win.”

Rev. Ron Robinson, a member of the steering committee of KSPH, stated that this Kentucky single payer group has been working on this issue since 2003.

“We’ve been in a war of consciousness over this immorality,” he said.

Kirk Gillenwaters, President of the Kentucky Alliance for Retired Americans, said that his organization represents retired union workers of Kentucky.  “One of the things about being unionized, we’ve all been receiving the benefits of a defined medical benefit.  Even though we are blessed with having the quality of life that we have, we know that this can be reversed and taken away with just the stroke of the pen, by denying us our secondary health care.”

He said that his United Auto Workers Local 862 was one of the first unions to join up with Medicare for All.  “That was almost twenty years ago.”

He spoke of the profits in medicine.  “You look at the top providers that manage our health care.  Humana hit $471 per share of stock yesterday.  United was $417.  Blue Cross Blue Shield $387.  That’s the profit off of our backs and the benefits that we’re supposed to be having—by the profit that they’re taking out of our health care.  This is why we’re asking for change.”

“We recently celebrated Juneteenth, the day honoring the end of slavery, the end of the despicable practice of buying and selling people as commodities, trading people as a business.

“Today all Americans are once again under the thumb of people who want to profit from us, the medical-industrial complex.  Health insurance companies, medical supply companies, and big Pharma.  We must throw off the yoke of business profiteering on health care.”

He said that several years ago the CEO of McKesson, a medical supply company had take home pay of $148 million.

“We must focus on health care not wealth care.  That is improved Medicare, comprehensive, high-quality care, including dental, vision, hearing, mental health and long term care paid through a national plan.  Privately delivered but paid for by our government.  The economists repeatedly have shown that we can afford this.  And the people including an increasing number of physicians want it.  We must build the political will to demand it.”

The participants, banners unfurled, then marched the half mile to Breewayy, Jefferson Square Park, where KAARPR had assembled large portraits of Breonna Taylor, who was murdered in her home as police carried out a baseless no-knock warrant.  There Mary Radford, RN, member of the KSPH Steering Committee, placed flowers in her memory and spoke:

“As an EMT and former Emergency Room Tech, Breonna undoubtedly experienced firsthand the consequences of a healthcare system that consistently failed the most vulnerable of our citizens. Based on everything I have learned about her, I have no doubt she served our community with grace, and empathy. I’ve also learned that the next step in her life of service was to become a nurse, and I can say with confidence I would have been proud to have her as a colleague.

“And while we take this moment to honor this Louisvillian, this Kentuckian, this hometown hero: taken from her family and her community through police violence, we also acknowledge the multiple black lives that have been taken in similar travesties throughout this nation.

“Through an unjust healthcare system, through gentrification, through police brutality and so many other ways, our fellow Americans are dying. We cannot stand for this any longer.”

The marchers returned to where they began.

The national March for Medicare for All continues the struggle with a human rights violation complaint to be submitted to the United Nations and the planning of a public UN panel discussion.

Harriette Seiler has put together a collection of photos.  Spectrum News covered it.  So did WLKY.  Rolf Friis, an independent Louisville videographer, showed the rally live on Facebook and put it on youtube.

Rally and march for improved Medicare for All.

We will begin at 11 AM in the park in front of the Federal Building where we have permission from the city to use the site.  We will set up under the trees near the corner of 7th & Chestnut so speakers and participants alike will be in the shade.

We will have speakers (brief) and music then march and/or caravan to Breewayy, the square at 6th between Liberty and Jefferson.

There we will place flowers in honor of Breonna Taylor, to connect with her profession as a healer, and to link the struggle for health care with the fight to end systemic racism.  We will return to where we began and share refreshments and socialize.

We will also be celebrating Medicare’s 56th birthday.  We hope you will join with us in demanding that Congress take action by passing a national single payer, improved Medicare for All plan.  Such a plan would end the tragic denial of care that causes so much suffering and unnecessary loss of life.

“Why is it so expensive?”

The American health care system is — to put it mildly — totally perplexing, an exercise in patience and a test of financial resilience.

And that’s for its participants.

So imagine what the system must look like to people from other countries, especially those with universal health care, where citizens don’t live in fear that the next bout of the sniffles might somehow lead to bankruptcy.

In the video above, we gathered people from around the world and introduced them to the American health care system. We presented them with dizzying examples of insurance plan options. We showed them how much medical services cost. And we revealed some of the survival strategies of the tens of millions of Americans who are uninsured (drug purchases in Mexico, GoFundMe campaigns, consultations with “Dr. Google”).

The country began the pandemic with a degraded public health infrastructure, leading to more deaths than other high-income countries.

At Last, Democrats Get Chance to Engineer Obamacare 2.0

The Biden administration is trying to make the health care law more generous and closer to its original design, but may disappoint progressive allies hoping for more. 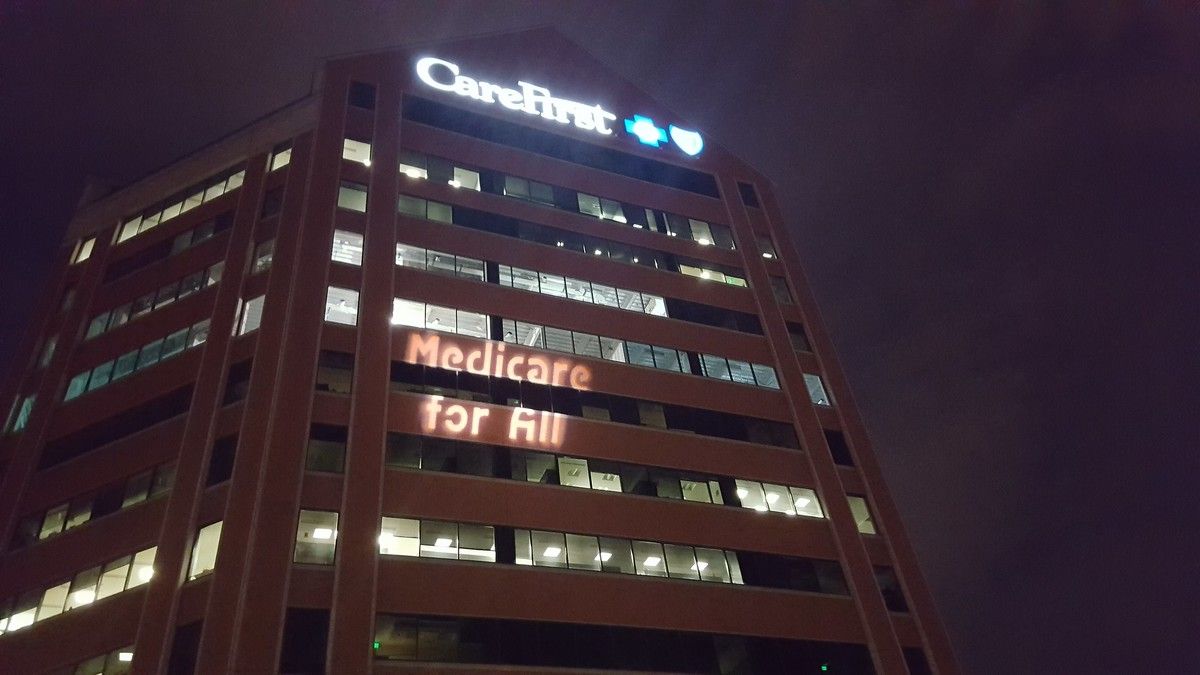 Many Americans assume that the private health insurance industry is an unmovable fixture in the U. S. health care system, but there is a growing need to re-examine that premise. Over recent decades, its performance has been increasingly profit-driven to the point of now becoming unaffordable for patients, their families, employers and taxpayers.

John Geyman, M.D. is professor emeritus of Family Medicine at the University of Washington School of Medicine in Seattle, where he served as Chairman of the Department of Family Medicine from 1976 to 1990. His most recent publications are Struggling and Dying under TrumpCare: How We Can Fix this Fiasco (2019) and a pamphlet, Common Sense: The Case For and Against Medicare for All, Leading Issue in the 2020 Elections (2019).