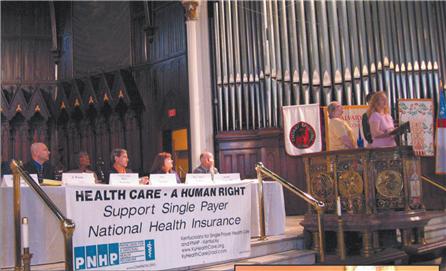 The crisis is rooted in the current for-profit financing of health care. There is a solution. It is comprehensive reform based on non-profit, public financing with private delivery of health services.–Garrett Adams, MD, MPH, Hearing Moderator

If anyone isn’t angry about this, they just aren’t listening! -Gerry C., small business owner

Her out-of-pocket expenses were 77 percent of her gross income–and she had insurance!-Edgar Lopez, MD, commenting on a neighbor’s experience

As chair of the Health and Human Services Committee, I represent the uninsured and the underinsured in our community-Mary Woolridge, Metro Louisville Councilwoman

On this issue, I believe the people are out in front of the politicians. -John Yarmuth, Congressional candidate, KY -3rd district

Co-pays are higher, coverage is decreasing–soon we will all be among the have-nots.

The so-called “ownership society” talk is just a smokescreen. The health care supply side-the insurance companies and drug companies-they own the system and control policy.

–Mark McKinley, testifying on behalf of a friend burdened with medical debt

I thought this would be primarily an urban issue, but I was amazed at the groundswell in the rural areas.-The Hon. Joni L. Jenkins, State Representative, sponsor of a Kentucky resolution urging Congress to enact HR 676

At a certain point I noticed the hushed attentiveness of the audience, the unique bonding among everyone there.-Mary Ann Garnar, on the impact of the testimonials

We will pay for health care the way we pay for all the things we think important-our justice system, our roads, our common needs-Ewell Scott, MD, featured speaker

Representing diverse interests–the uninsured, the underinsured,small business owners, those coping with the increasing costs of premiums and/or medication, and those burdened by medical debt-the testifiers told their stories, hoping to move both the public and public officials to take immediate action.

The two-hour event, billed as a “Citizens’ Congressional Hearing on the Health Care Crisis,” was sponsored by Kentuckians for Single Payer Health Care (KSPH) and the Kentucky Chapter of Physicians for a National Health Program (PNHP-KY). Co-sponsors included 33 labor and social justice organizations (listed below).

The forum was one of 70 such hearings being held across the country, and one of many special events scheduled during the week of 6/7/06, a week of national action called by Healthcare-NOW.org in support of HR 676, the United States National Health Insurance Act, the single payer plan proposed by Congressman John Conyers.

Congresswoman Anne Northup was invited, but she responded through staff that she would be unable to attend.

Kentucky House members Darryl Owens and Jim Wayne were in the audience, and several state lawmakers–from both sides of the aisle–sent messages of support for the event.

Each testimonial addressed a different facet of our broken health care system. Gerry C., owner of a small business, had tracked the percentage rise in the employer’s share of premium costs over the past few years, finally admitting that he could no longer cover his employees and stay in business. “If anyone isn’t angry about this, they just aren’t listening,” he concluded.

Paula V. spoke tearfully of her husband’s need for a liver transplant. The family, including two young children, has been caught in a bureaucratic nightmare, asked to meet competing criteria for disability benefits, the wife’s employer-based insurance, and Passport/Medicaid. Through it all, a very sick young man has been asked to jump through multiple financial and therapeutic hoops.

Michele F., a self-employed widow in her mid-forties, was paying $2000 annually for a catastrophic plan when, last summer, the catastrophe occurred. Michele suffered a stroke, spent three days in the hospital and is now trying to pay off $7,000 in out-of pocket expenses. Currently, she has a family policy with a $20,000 deductible and prays her children don’t get ill.

Carrie I., a young mother who has asthma and high blood pressure, spoke of having remained in a very unpleasant job because she feared losing her health coverage. Although she now has a better work situation, health care expenses absorb one third of her salary. She admits to skimping on her own medication, and must often renegotiate with her insurer to make certain her children are covered.

An uninsured home health aide, Francene S., age 51, told of her struggles to get specialized care after her heart attack. She worries what will happen if the stents in her heart need to be replaced. She works and has tried to get insurance but the $2000 to $3000 monthly premiums quoted are far beyond her ability to pay.

Mark McKinley relayed the story of his friend, Penny K, injured in a kayaking accident. Penny had been paying $290 a month for what she thought was adequate health insurance. She received excellent medical care for severe back and neck trauma, but she has been left with a debt of $11,000 for uncovered expenses. “The so-called ‘ownership society’talk is just a smokescreen,” Mr. McKinley remarked. “The health care supply side – the insurance companies and drug companies – they own the system and control policy. We get stiffed and just own more debt. It’s time to say ‘no’ to the status quo!”

Speaking for the Jefferson County Teachers’ Association (JCTA) and Jobs with Justice, Ann Walsh recalled that health care was the major issue in the teachers’ recent round of negotiations with the State. She expects it to come up again. She decried the “greed of the health insurance industry” as costs are increasingly being shifted to the worker.

The Reverend A. David Bos reminded attendees of the accumulating wealth and political power of the health care and pharmaceutical industries. Public monies that should be used to fight disease and environmental harms are being funneled instead to the profit-making health care “juggernaut.”

Dr. Edgar Lopez, a member of PNHP-KY, wore black armbands in memory of the estimated 18,000 who die each year for lack of access to care. Waving invoices as proof of the out-of-pocket costs paid by a neighbor who suffered from a chronic illness, Lopez exclaimed, “Her out-of-pocket expenses were 77 percent of her gross income– and she had insurance!”

Reflecting on the combined impact of the testimonials, KSPH member Mary Ann Garnar said, “At a certain point I noticed the hushed attentiveness of the audience, the unique bonding among everyone there.”

The featured speaker, Dr. Ewell Scott, an internist from Morehead, KY and also a PNHP member, outlined “the single payer solution.” He explained how a national nonprofit health insurance system would work,and why attempts at short-term fixes will not. “Reducing the number of health insurance companies in the US from an estimated 2,000 to one will save us 400 billion dollars a year,” he exclaimed. “No one disputes these figures.”

To those who would ask how the system would be financed, Dr. Scott offered this response: “We will pay for health care the way we pay for all the things we think important-our justice system, our roads, our common needs.”

The savings generated by the administrative efficiency of single payer, combined with the public dollars already in our system, would provide enough funds to cover everyone in the US. If supplemental financing is necessary, HR 676 proposes minimal taxes. “There will be no premiums, no co-pays,” Dr. Scott reminded his listeners, adding that any required taxes would be levied equitably: “Each of us will participate to the degree that we are able.”

“My plea is to spread the word,” Dr. Scott concluded. “Talk to your representatives about single payer. Tell them ‘It’s easy, but you’ve got to have the guts to do it!'”

Members of the hearing panel were asked to give a brief response. They thanked the testifiers for their courage in speaking out, and they pledged to redouble efforts in support of health care for all.

“In everybody’s family, there’s a testimonial like those we heard today,” observed Senator Neal. “That means there’s an army out there waiting to be organized, to be focused [on reform] . . . what’s happening now is breaking people’s lives.”

The Senator promised to support a state endorsement of HR 676, but he believes true reform must be implemented at the federal level. He urged the hearing organizers to continue efforts to raise public awareness, to educate their representatives on the merits of single-payer. Referring to the challenging task ahead, the Senator spoke bluntly: “The insurance companies are well organized and well funded. Only sustained activity by motivated volunteers can counteract the power of that ‘paid army.'”

J. Wayne Crabtree brought greetings from the Director of the Louisville Metro Health Department, Dr. Adewale Troutman who has researched the more equitable delivery of health care in countries having single-payer systems.

Public health officials view health care from a disease prevention perspective, said Mr. Crabtree. “As we have seen with HIV-AIDS and other infectious diseases, sickness can quickly spread throughout the world.”

Moving the argument for reform to the local level, Crabtree reported that an estimated 12 percent of Kentuckians are uninsured.”These individuals have names, faces, and families.” Even the insured cannot be complacent: “Co-pays are higher, coverage is decreasing–soon we will all be among the have-nots.”

“Health care for all is long overdue,” exclaimed Councilwoman Woolridge, pledging to work towards passage of a Metro Council resolution in support of HR 676. She invited area residents to sign up to speak at local Council meetings. “As Chair of the Health and Human Services Committee,” she pointed out, “I represent the uninsured and the underinsured in our community.” She closed with a quote from Dr.Martin Luther King, Jr., noting that his words are still relevant today: “Of all the forms of inequality, injustice in health care is the most shocking and inhumane.”

Candidate Yarmuth urged voters to boldly confront candidates on health care, to track campaign donations from the health care industry, and to vote for those who support a national single payer system. Facing an incumbent well-funded by the for-profit health care sector, he acknowledged that it is not easy “to discuss a complex issue like health care reform in sound bites.” Mr. Yarmuth is, however, encouraged by the fact that “on this issue, I believe the people are out in front of the politicians.”

Rep. Joni Jenkins recalled her work as sponsor of HCR 40 (a State resolution calling on Congress to enact the Conyers bill) during the recent Kentucky legislative session.” I thought this would be primarily an urban issue, but I was amazed at the groundswell in the rural areas. Several colleagues, Republicans as well as Democrats, came to me and said, ‘I need to sign on to this. I am hearing about this back home.'” The resolution went to the House floor with bipartisan support but the bill was not ultimately called for a vote.

“Don’t worry–we’ll be back in Frankfort for the next session,” said KSPH Coordinator Kay Tillow, issuing an urgent call for grassroots action. Ms. Tillow has been successful in gaining endorsements for HR676 from labor organizations around the country.

Dr. Garrett Adams, coordinator of PNHP-KY, explained the rationale for holding such a public hearing: “It is clear that we have a very serious health crisis in this country caused by a gradual change of health care delivery from a human service, a social good, to a market-driven industry. The crisis is rooted in the current for-profit financing of health care. As Dr. Scott has said, there is a solution. It is comprehensive reform based on non-profit, public financing with private delivery of health services. The United States Health Insurance Act, HR 676 will accomplish this true reform. Our people deserve to see this bill enacted.”