On Monday, June 26, 2017, Karen Armstrong-Cummings of Together Frankfort emceed a rally in the Capitol Rotunda in Frankfort urging calls to Senators Mitch McConnell (202) 224-2541 and Rand Paul (202) 224-4343 to demand hearings on the McConnell bill that would repeal and replace the Affordable Care Act. Together Frankfort organized the standing room only rally and Indivisible Bluegrass, Our Revolution Central Kentucky, and Together We Will Bluegrass joined them.

Speakers included Dustin Pugel of the Kentucky Center for Economic Policy; Robin Rider-Osborne, an advocate for those with mental illness and those on Medicaid; Greg Welch of Together We Will Bluegrass; and Coleman Eldridge, former Assistant to former Governor Steve Beshear.

Beshear is nationally acclaimed for assertively implementing the Affordable Care Act in Kentucky, bringing coverage to over half a million people. About 470,000 of those are covered under the expansion of Medicaid. That coverage is now threatened by the Ryan bill that was passed by the House and the McConnell bill that is pending in the Senate. 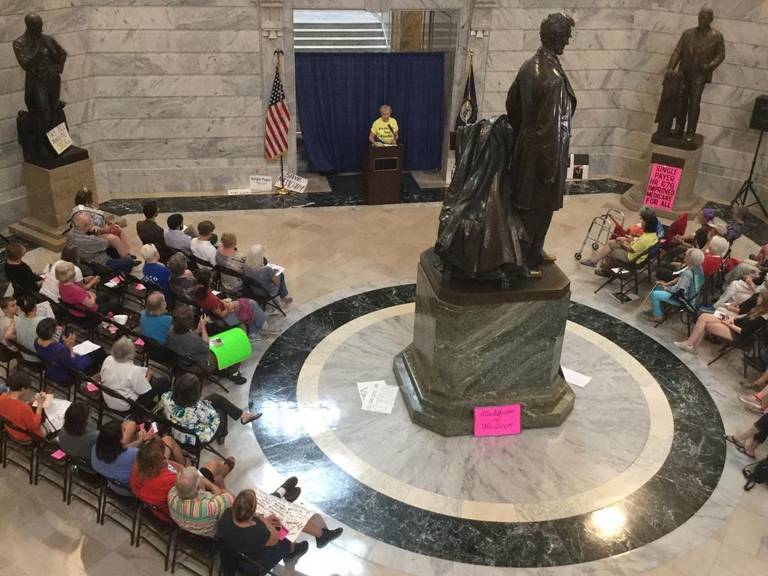 Kay Tillow of Kentuckians for Single Payer Health Care was the featured presenter. Armstrong-Cummings explained that Together Frankfort did not want only to oppose bills that are harmful but also to project a positive way forward. Hence single payer was right up front at the rally.

Kay Tillow, Director of Kentuckians for Single Payer Healthcare, said health care costs in the U. S. are about $10,000 per person annually.

“The health care systems of the other industrialized nations average about $5,000 per capita,” Tillow said. “The tragic story is all those countries with half the money are doing better on outcomes.”

While supportive of the Affordable Care Act, also known as “Obamacare,” the group say they are in favor of a bill sponsored by Rep. John Conyers, D-Michigan, which would establish a nationwide single-payer health care system. 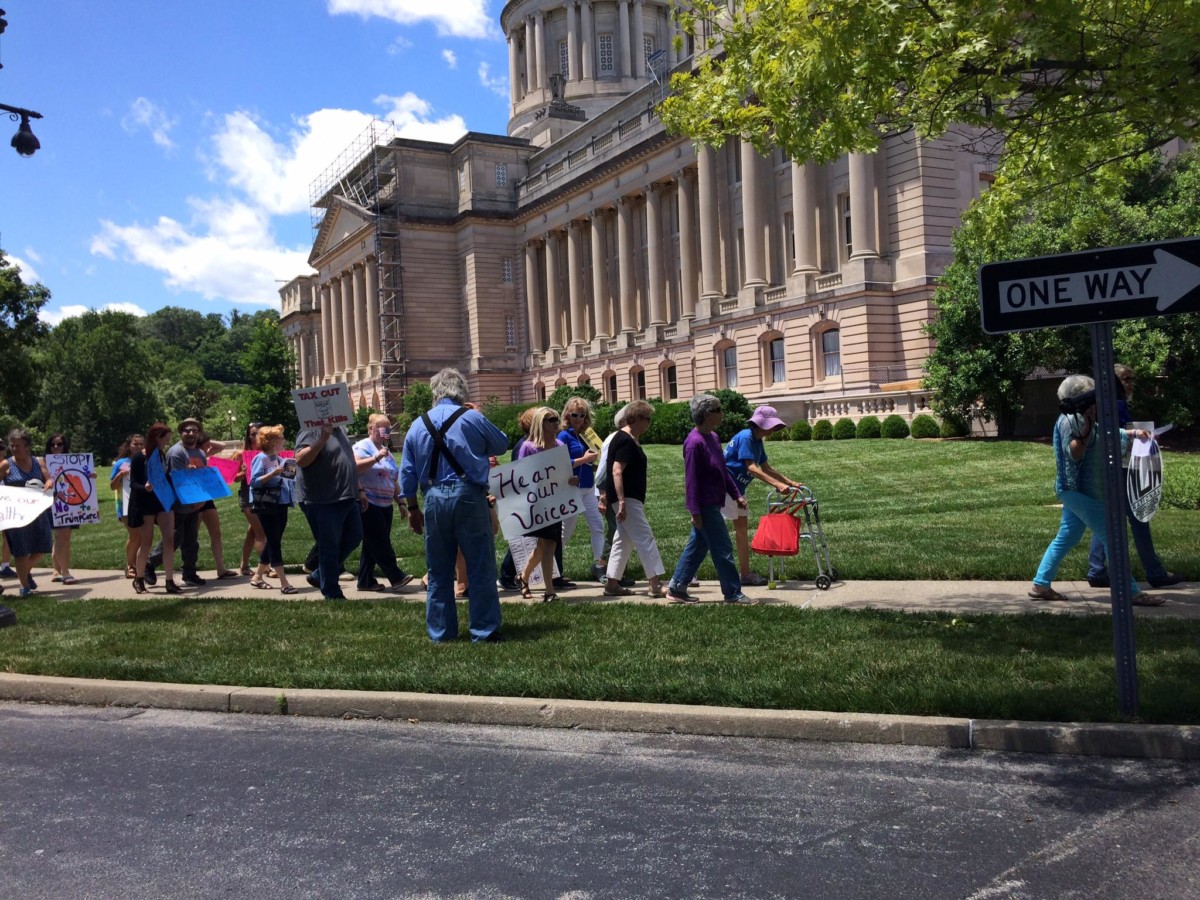 Following the rally the group walked to the Republican headquarters to deliver the message to save healthcare and promote single payer. KSPH Steering Committee member Jill Harmer was among the marchers.

The rotunda statue of Roosevelt’s VP, Alben Barkley of Paducah, sported a single payer, HR 676, Improved Medicare for All sign as well, and Christine Perlin stood by Abraham Lincoln. 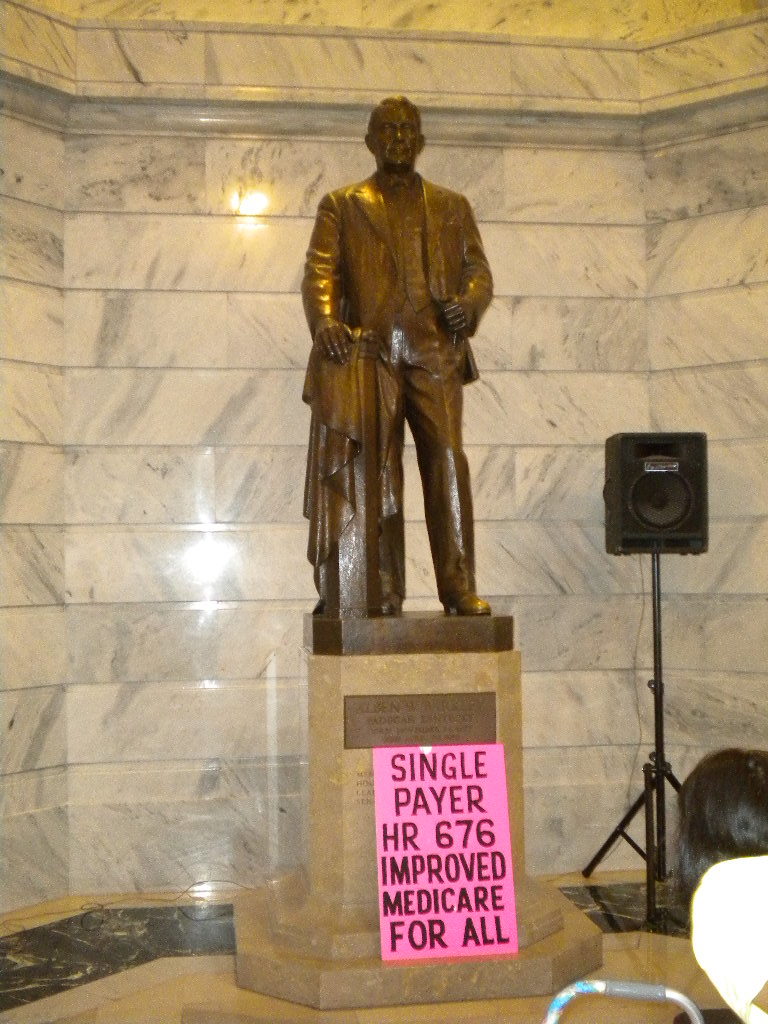 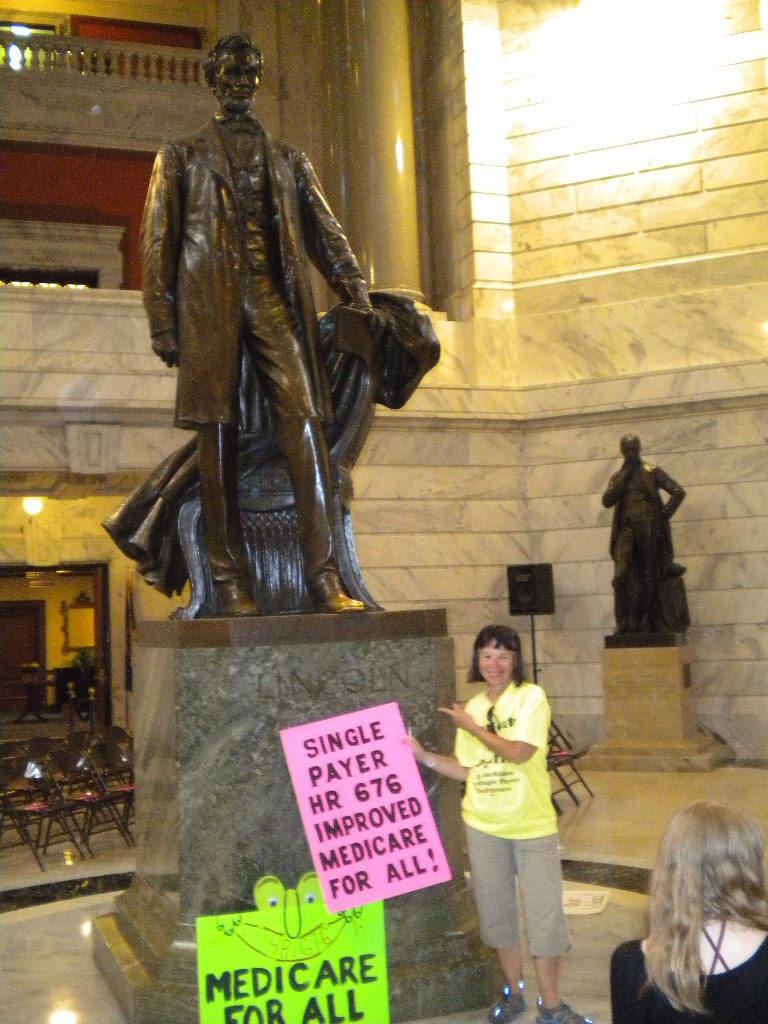 The Lexington Herald Leader and the State Journal in Frankfort also covered the story.

There are many more photos on the Together Frankfort facebook page.

Ending the rally, Coleman Eldridge brought the crowd to their feet by asserting that “Health care is a right, not a privilege. This is a matter of moral right and wrong… If we can put a man on the moon, we can ensure that millions of Americans and Kentuckians have access to affordable health care.”

(Link to Kentucky blogger Mommyof3 story on the rally.)