Medicare–Protect It, Improve It, Expand It!  PIE!

On July 30, 2015, Medicare’s 50th anniversary, a broad Louisville audience packed the Centennial Room at the  library to hear Johnathon Ross MD explain the history of Medicare in the United States and project a future of an expanded and improved Medicare for All.  Dr. Ross, past president of Physicians for a National Health Program, teaches and practices internal medicine in Toledo, Ohio.

Jill Harmer and her group opened the event with song and laughter.

(Dr. Adams’ opinion piece “Celebrate Medicare’s 50th Birthday by Expanding It To All” was published on Common Dreams, and he was interviewed by Pacifica Radio.) 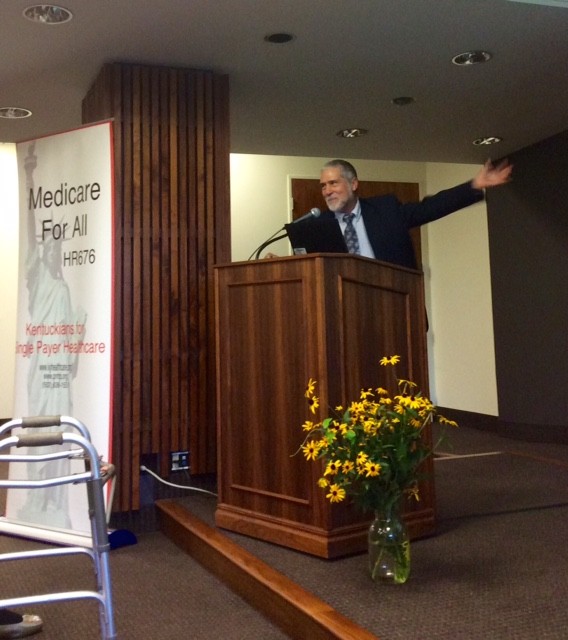 Dr. Ross combined history with humor as he informed.  We still lose 30,000 lives each year, unnecessarily, because we, as a nation, have not yet  instituted a universal health care system, he said.

Antonio Wilson closed out the evening with a call for everyone to contact their congressperson urging support for HR 676.  Upon adjournment, the group shared the apple pies prepared by Harriette Seiler.

In the lead up to this 50th anniversary, two additional representatives signed on to HR 676, Congressman John Conyers’ Expanded and Improved Medicare for All legislation, Rep. Brenda Lawrence of Michigan and Rep. Wm. Lacy Clay of Missouri, bringing the total to 51.
Rep. Conyers chaired the festivities in Washington, DC, which can be viewed here.
Berry Craig of the American Federation of Teachers Local 1360 who lives and writes in Mayfield, Kentucky, published a Medicare celebration article on the Kentucky AFL-CIO website.  It is here. 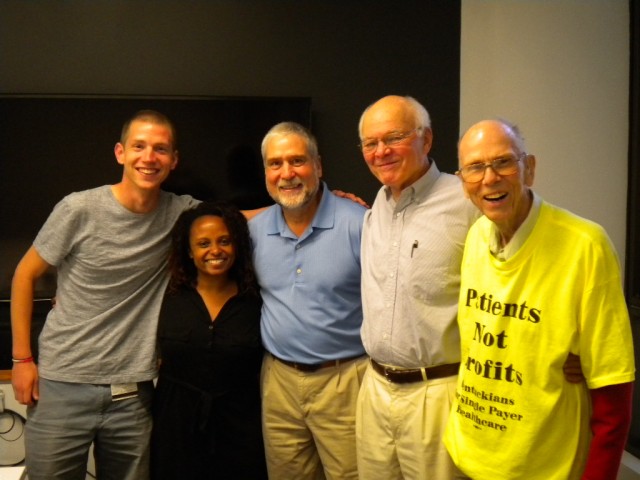 While in Louisville, Dr. Ross met with University of Louisville medical students who are working to organize a student chapter of Physicians for a National Health Program.  L to R:  Second year medical students Michael Gasser and Brandi Jones, Johnathon Ross, Garrett Adams, and Tom Moffett.